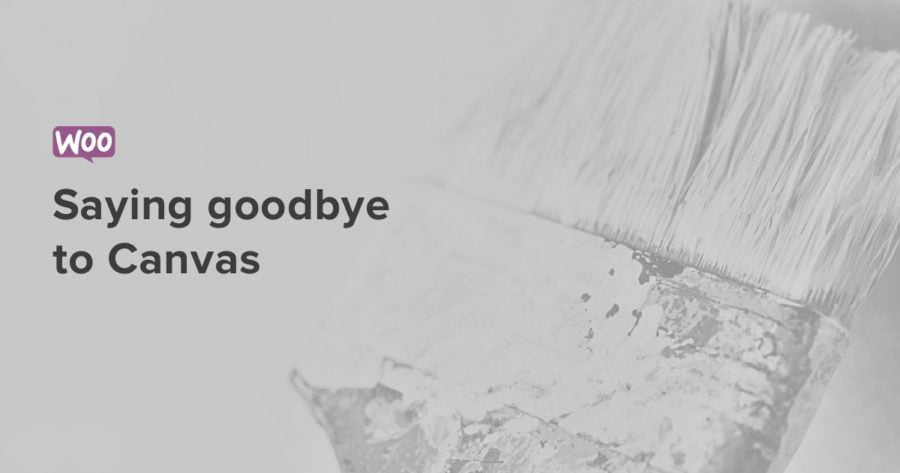 We’ve come to a difficult decision: as of today, we’re no longer selling Canvas.

We know that this is a big change for you, but we believe it will set your sites up for better success in the future. Read on for more details about how we got here and how we can help moving forward.

We launched Canvas in February 2010 — one of the first themes we created using the WooFramework — and it became one of our most popular. Canvas moved themes forward by innovating on the concept of theme frameworks, empowering builders to create some amazing sites. We’ve seen Canvas used to create lovely experiences on personal blogs, political websites, record stores offering thousands of products with WooCommerce integration, and more.

The WordPress theming world will experience a new wave of innovation over the next two years. The rise of page builders and the many multipurpose themes means more and more people expect easy-to-use customization tools for WordPress. Current work on the WordPress core Editor and Customizer will evolve how we build and use themes, and the Gutenberg plugin will fundamentally change how themes and content within WordPress are created.

Canvas isn’t built to keep up with the changes

While still early, we believe strongly that Gutenberg is the future. We’ve decided to invest our resources in preparing our products for it in order to bring you the best experience. Unfortunately, that won’t include Canvas.

When I first joined WooThemes in 2009, we had just created a new theming framework dubbed the “WooFramework” and had begun building themes on top of it. It has been one of our biggest strengths, and ultimately one of our biggest challenges as well. Canvas benefitted from the WooFramework, which was created at a time when the Customizer didn’t yet exist and theme options were becoming popular.

At the time, it was a great solution. However, over time we kept adding features to the theme; this added to the complexity of the code, and ultimately made it more difficult for Canvas to evolve with shifts like the Customizer and the Gutenberg Project.

That brings us to Canvas 6.

We built two iterations of Canvas 6; one made it as far as alpha testing stage with a select group of existing Canvas customers. Thankfully, this feedback helped us realize we built something customers didn’t want. Our intention was then to keep working on Canvas and to find the best solution for where Canvas was heading.

So we went back to the drawing board and did extensive research into how we could bring Canvas in line with the Customizer and to smooth out theme activation and setup.

During this work, we came to the realization that the legacy of the WooFramework, Canvas Theme Options, and the overall complexity of the theme meant that Canvas was just too far behind similar themes in the ecosystem.

This includes our other flagship theme, Storefront, which was built on top of the Underscores starter theme, which better prepares the theme for the future.

Bringing Canvas in line with current WordPress standards and feature compatibility — specifically, making it fully compatible with the Customizer and the upcoming Editor changes — requires a complete overhaul of Canvas’ underlying logic as well as how the theme functions. It would be a completely different experience, one that we knew our users didn’t want.

Overhauling the theme wouldn’t serve our users, yet continuing to sell it as-is wasn’t the right decision. So we made the difficult decision to say goodbye.

We considered open sourcing Canvas to the community, but ultimately decided that extending its lifetime will not serve the community. It’s in the best interest of our users and the community to eventually move to another theme.

Going forward, we suggest users make a change — and we’re here for you

We are no longer selling Canvas, but we are not stopping support and bug fixes for it. We will continue to provide you with the same level of support that your theme subscription has always included.

It’s important to note that you have time to make a decision on a new theme. One of the main reasons we’re no longer selling Canvas is that we feel it won’t be in your best interests to use it in the future, knowing where WordPress is going to be in the not so distant future. Canvas isn’t going to immediately stop working — it just won’t support the next generation of WordPress features.

As a practical step, we believe that Storefront is the best replacement for Canvas, both for developers as well as anyone building sites without modifying their theme’s code.

Developers loved Canvas for the hooks and filters extensibility, and Storefront has this and more. It was built from the ground up specifically for this purpose. There are a variety of extensions offering similar functionality to Canvas. And most importantly, it is well-positioned to support both the Customizer (right now) and Gutenberg (in the future).

We value you as our community, and we want to position you and your sites to be as successful as possible. Canvas has been a popular choice for agencies and developers, something we are proud of, but it’s no longer the best way to ensure your success.

We’re here to support as you figure out what it looks like to change themes. We firmly believe that this is a step towards helping you build better sites and better experiences on the web.

If you have questions or concerns, do not hesitate to get in touch with one of our Happiness Engineers.