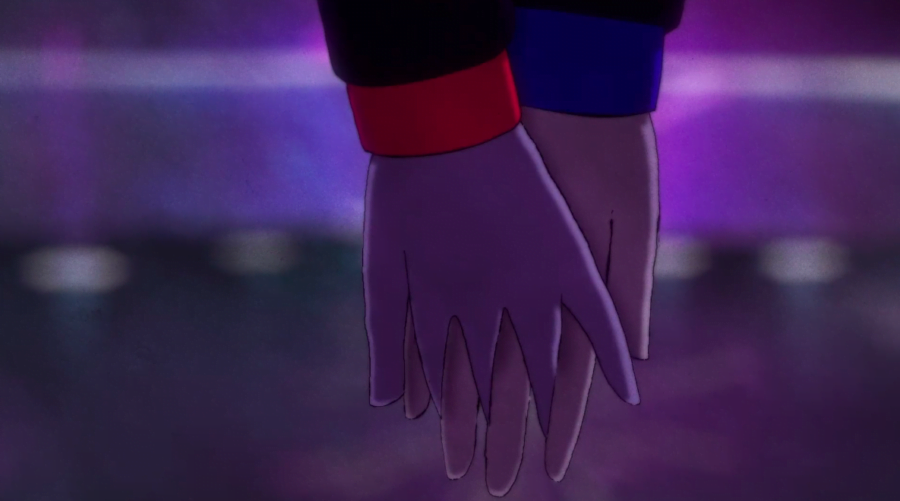 Over the weekend, I had the privilege to meet Sean Buckelew, director and animator of Lovestreams — a short film about net-cross’d lovers. Lovestreams screened at Rooftop Films’ Net Positive event in Brooklyn, NYC, and I was captivated as I watched it. To me, Lovestreams highlights one of the most basic, yet least discussed, values that the Internet can provide: human connection.

Human connection brings complex value to our lives and to society as a whole. Beyond romantic relationships, the Internet in its purest form enables us to connect with others — to share interests, to debate, to argue, to innovate, to build — no matter where we live in the world, what we look like, or what has held us back in the past. An open, healthy Internet enables free expression and interaction with one another, and this is something worth fighting for.

LOVESTREAMS from Sean Buckelew on Vimeo.

I had so many questions for Sean after I watched Lovestreams, and Sean graciously agreed to a Q&A with me. I’m delighted to bring you his thoughts and perspectives here.

Me: What inspired you to make a film about love on the Internet?

Sean: Before I started working on Lovestreams, I had been in production on a different film — also about the Internet, and set in 2006.  That film focused on the Web’s growing influence on identity politics and commercialization.

While I was in the middle of working on that film, I got a message from Late Night Work Club, an online animation collective I’m a part of, about making a new anthology of films, themed Strangers. My mind was already swimming in retro-Internet land, and it was at this time that I started considering making prequel to the film I was already working on to take place in 2002 — when a casual Internet user would have had a lot more encounters with truly anonymous strangers.

Around the same time, my brother emailed me this Final Fantasy 8 video, and I found myself feeling completely unironically moved by it. It made me want to try making a film that was illustrative of sincere romance — something that, oddly enough, I felt in my own personal experiences while flirting online as a teenager in the early days of online chat. (I’m not sure if the format of text only, non-physical interaction was particularly conducive to such viscerally intense emotion, or if that is just how everything romance-related feels when you’re 16.)

Me: Lovestreams opens with a conversation in a chat box from 2002, reminiscent of AOL Instant Messenger. This scene highlights how much the Internet has changed since that not-so-distant past. What do you miss about that past?

Sean: There’s a line from Edward Snowden in Laura Poitras’ documentary Citizenfour that I like a lot:

“I remember what the Internet was like before it was being watched. And there’s never been anything in the history of man that’s like it. I mean, you could again have children from one part of the world having an equal discussion where, you know, they were sort of granted the same respect for their ideas in conversation with experts in a field — in another part of the world on any topic, anywhere, any time, all the time. [The Internet] was free and unrestrained. And we’ve seen the chilling of that and the cooling of that and the changing of that model towards something in which people self-police their own views.”

Over the past 15 years, the Internet has obviously developed in really incredible ways. But, I think a sense of playfulness and mystery is definitely gone. I remember how — in the late 90s and early 00s — people would be really careful about what they revealed about themselves online. For me, I have memories of trying to appear more mature and more sophisticated because the people I was friends with and interacting with didn’t know how young I was. Back then, it was easier to meet and engage with people who you had no context for knowing — you would just strike up a conversation with a stranger and see if you got along.

While I understand that the freedom that comes with complete anonymity online (circa 2002) is potentially the same freedom that allows you to be a giant piece of s*** with no repercussions, I don’t see a reduction of trolls online now, despite the fact that our identities on the Internet are way more aligned with our identities IRL.

I also miss the decentralized nature of the Internet. Facebook, for example, is one of the titans today, and as a centralized force, has the power to almost define how we self-identify and perceive each other. For example, I cringe when I see people celebrating Facebook for opening up more gender options in profile settings, because they’re continuing to have us all select, pick, and adhere to a rigid gender framework (associated with real life) in the first place.

Me: In addition to chronicling the past, you’ve also called Lovestreams an “archaeology of the present.” What does the present look like to you, with regard to human-to-human connection on the Internet?

Sean: The phrase “archaeology of the present” is from a great book called The Future of Nostalgia by Svetlana Boym. For me, it means unpacking the good and bad of what is happening today online, and not getting lost in the nostalgia of what once was.

The Internet today could be a place where everyone expresses themselves without inhibition and has fruitful dialogue. This is promising because as a platform, the Internet has the potential to bring people together, to create pure democracies, and solve big global crises. At the same time, we’re seeing things like Facebook Internet Balloons. Algorithms shape what we see, and these algorithms often influence how, and sometimes even if, we connect with one another emotionally and politically.

I’m inherently interested in online forces and how they alter the way that we connect. These forces are bound to morph as we intelligently call out both opportunities and problems with the system as we see it today.

Sean: As the Internet bleeds more and more into the real world, I think there are spaces where being anonymous is, for practical reasons, not a good thing.  Like, when I use AirBnB, I don’t mind some good old fashioned IRL accountability through identity verification.  But I remember the moment when YouTube started cracking down on anonymous users about 5 years ago, forcing everyone to merge their Google accounts with their YouTube accounts and use their real names when commenting. (This was presumably to crack down on toxic behavior playing out in comment sections, and to also serve the interest of Google, which had just acquired YouTube.)

With lessened anonymity on YouTube, and now with brands threatening to withdraw ads from YouTube so that their marketing messages don’t end up next to videos they don’t care for, the whole platform is functioning more and more like regular TV with heavy editorial oversight and commercialization, rather than as as a creatively pure platform for expression. (When I first started animating, I would upload my films to Newgrounds. At that point, there was no way to monetize putting your films online, so everyone was just making stuff for the love of making stuff and sharing with other people. People could choose to be anonymous at that time, free from judgment and imposed societal bias, and there was freedom in that.)

Me: What is your hope for the future of the Internet?

Sean: I hope that there is some kind of pendulum swing back away from networks like Facebook as the portal through which people discover content.  Beyond the polarizing political ideologies brought to us by walled gardens like Facebook, I think that it’s also the worst context for viewing more artistic or cinematic content.

I really love the Internet as a distribution platform for films. I’ve seen so much great stuff and have found a really great community with independent animators online, but I sometimes wish there might be a return to standalone Websites that completely re-imagine how a film can be experienced online.  An example that I found really inspiring was the David OReilly site (which no longer works, but you can see an archive of it here). It presented a full-screen, standalone, daisy chain of films with unclear duration, glued together by a semi-abstract text-based story about a machine becoming self-aware. This presentation felt exciting and didn’t box the viewer’s experience into a generic media player accompanied by 140 characters, for example.

I hope more people start to build communities or launch projects outside of big platforms, and that they attract huge fan bases. And importantly, I hope that they’re successful — just to demonstrate alternative models for sharing film, animation, and other kinds of work online.

Me: The final message in Lovestreams is, “You are not alone.” Why did you choose to end on this message? What do you hope viewers will take away from the film?

Sean: I picked that line as the closer because I think it sums up a big emotional aspect of online interactions. None of us are really alone anymore, ever. But I also think that carrying out physically disconnected relationships can almost heighten the sense of feeling alone. So in that moment, the SumrEvryDay character says “I’m here”, meaning “I’m here for you” in an emotional sense, but also could be seen as “I’m here” literally in this AIM box.

I think the line “You are not alone” also points back to nostalgia. I didn’t want to just indulge a romantic version of how great the early 00s were for interacting online. I also wanted there to be some kind of critique where viewers could analyze the limits of the technology from this era.

As much as Internet relationships can be emotionally real and intense, can they actually function as a meaningful substitutes to basic physical interaction? I don’t think I have an actual answer to that, but it’s a question I think about a lot.

“You are not alone” is also a reference to this ATB song, which has a tight music video.

Sean Buckelew is is a director and animator based in Los Angeles. He received his MFA from the California Institute of the Arts, and he earned his BFA from the School of Art Institute of Chicago. Follow Sean and his work at @SeanBuckelew.