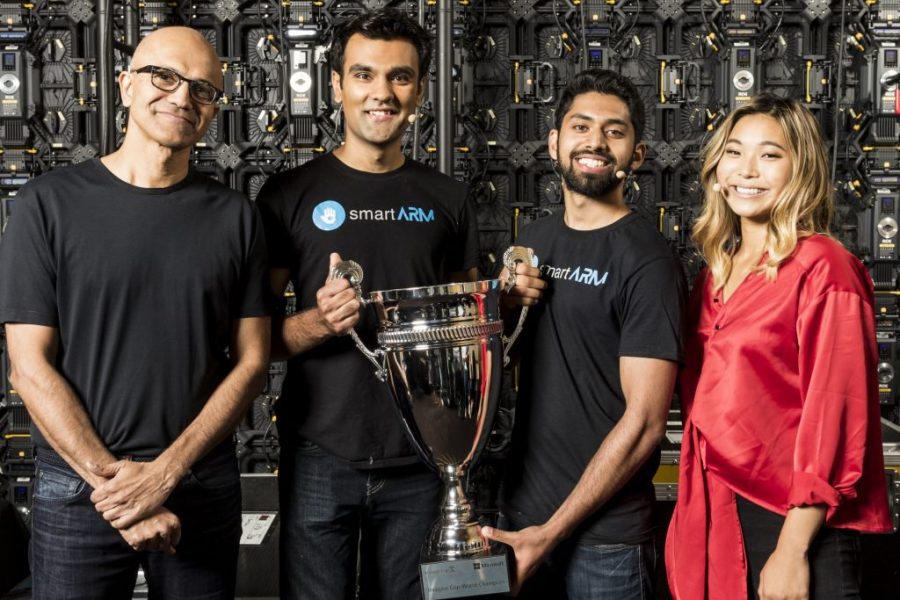 At its heart, the Imagine Cup is all about bringing students together from across the globe, inspiring them to usher in our collective future using cloud-based technologies of today and tomorrow, including artificial intelligence (AI), big data, mixed reality and more. Since its inception 16 years ago, the Imagine Cup has motivated nearly 2 million students from over 190 countries around the world to bring their biggest, boldest ideas to life.

Today, we are excited to announce smartARM of Canada as the 2018 Imagine Cup champions! smartARM created a robotic hand prosthetic, using Microsoft Azure Computer Vision, Machine Learning and Cloud Storage, that uses a camera embedded in its palm to recognize objects and calculate the most appropriate grip for an object. Based on machine learning, the more the model is used, the more accurate it becomes.  As the victors, smartARM wins a mentoring session with Microsoft CEO Satya Nadella, $85,000 in cash and a $50,000 Azure grant. Team iCry2Talk of Greece earned second place with a low-cost and non-invasive intelligent interface between infant and parent that translates in real time the baby’s cry, and associates it with a specific physiological and psychological state, depicting the result in a text, image and voice message. Third place went to Team Mediated Ear of Japan for its project, Mediated Ear, software for hearing-impaired individuals to focus on a specific speaker among a multitude of conversations. Mediated Ear can relay specific sounds in audio waveforms through deep learning.

For the winners, and for their competitors, the road to the World Finals started with a single idea on how to change the world through innovative use of technology. Tens of thousands of students walked this road, spending months coding their solutions and dreaming up go-to-market plans to bring their ideas to life. From there, and through fierce competition at the national and regional level, 49 teams from 33 countries were selected to compete in the World Finals.

This year, we’ve added special Imagine Cup awards of $15,000 for three key areas of digital transformation: AI, big data and mixed reality. On Tuesday, we crowned the winners. SochWare from Nepal, won the AI award for designing a solution to help farmers identify plant diseases, suggest mitigation strategies, connect with experts and get updated with recent agriculture findings. Drugsafe from India won the big data award for their solution to validate genuine drugs and decrease illness from counterfeit substances. Pengram from the United States won the mixed reality award for allowing engineers from around the world to be holographically “teleported” into a workspace when needed.

The 2018 winners emerged from a strong field of competitors featuring projects that utilized leading-edge cloud technologies with the promise of improving the way we live and work. Throughout it all, the next generation of innovators put their creativity on display in addressing some of humanity’s most pressing issues.

This year’s participants weren’t just developing unique and potentially game-changing technology experiences, but they are also actively sharpening the skills that will boost their success as developers, technologists and entrepreneurs for the next generation. They follow in the footsteps of a long line of dreamers driven to succeed. For example, 2017 year Imagine Cup alumni Declan Goncalves of Canada was featured in Betakit’s “Canada’s Developer 30 Under 30” list for developing a platform which allows medical practitioners to better quantify their patient’s progress and detect neurodegenerative disease onset with the help of AI. Another alumni team, Kobojo, began their journey making Facebook games at Imagine Cup 2008 and has since raised $6 million in venture capital for their startup.

I’d like to thank this year’s championship judges: Co-founder and COO of Bitnami, Erica Brescia; CEO of Glitch, Anil Dash;, and Microsoft’s own Peggy Johnson, Executive Vice President of Business Development at Microsoft. Special thanks also to Microsoft Corporate Vice President of Azure Compute Corey Sanders, who hosted the championship and announced this year’s winner. Last but certainly not least, on behalf of Microsoft, I’d like to congratulate our new Imagine Cup champion, team smartARM, and all of the students who worked so hard to make this 16th anniversary Imagine Cup the most inspiring one yet. If you haven’t had a chance, be sure to view the championship video above to see some of the best student developers in the world envision a brighter, bolder future for us all.

P.S. Follow me on Twitter for updates on Imagine Cup and other news and noteworthy information in the cloud and ecosystem space.