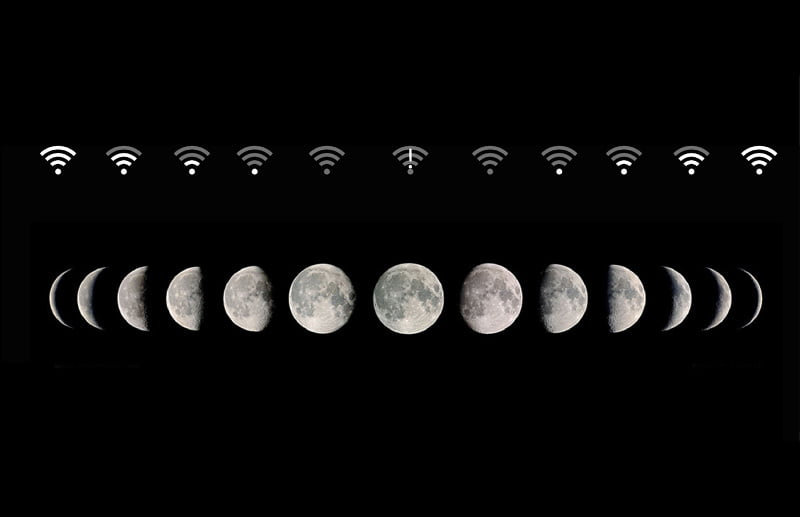 If you’re like most Americans, you sleep with your phone. You wake up on the internet, scrolling through a feed. If the signal flickers, you’ll look for a spot closer to the router. You turn on maps and follow GPS wherever it takes you. You don’t need to recognize the surface streets anymore. And it’s normal, and it’s everyday, but it’s extremely weird when you actually think about it. To be human in 2018 is to have an out-of-body experience all the time.

In this week’s episode of IRL, we talk about technology creep and what it’s doing to us. Artist (and Glass Room contributor) Tega Brain calls it being “radiotropic”: a world where we’re shaped in response to radio frequencies. In her own work, she explores the scope, politics and strangeness of emerging technologies. What happens when you write code to fake out your Fitbit? What if you fed your plant Wi-Fi instead of water? Could a Tinder-for-scent help you find your next date? Brain uses eccentric engineering to interrogate digital dependency. We caught up with her to learn more about what it means to live and create with the internet.

What was your first experience with the internet like?

I remember my dad brought home an IBM 386. This was our first family computer. I guess this was the mid to late 1990s? Scheduling who got to use it in the family was a constant drama. I’d want to use ICQ to chat with my friends, but whoever had work to do would get first priority. I remember constantly getting into trouble for being online too long.

What made you interested in using technology as a medium?

I studied and worked in engineering for a few years, and, in my experience, I couldn’t find opportunities within the industry to explore the politics of technology. To me, it seemed that so many of the engineering challenges we were trying to address weren’t technical issues, but cultural issues.

I started to exhibit public experiments in art spaces; working with the tools and materials of engineering, but trying to build systems that embody other philosophical positions. I call this type of work eccentric engineering. These are systems that don’t assume a narrative of progress, and that break out of the false assumption that humans are somehow separate, individual units who don’t have negotiate with the biosphere.

For example, my work Being Radiotropic is a series of routers with networks that are shaped by the environment around them: lunar cycles or fluctuating soil conditions. Or my project Smell Dating, an online dating service that lets you choose dates via body odor, which of course involves the microbial community of the body. Bodies are collaborative communities that shape our emotional and psychological states. How might a dating service be designed with this understanding?

What do you hope people feel or take away when they interact with your work?

I want people to come away with the sense that technologies are not fixed, nor neutral. That every system advantages some communities and disadvantages others. That every system privileges certain perspectives and practices as important, and deems others as irrelevant.

I hope that in seeing systems that prioritize different philosophical positions, people can more easily see the political and ideological characteristics of all technologies. From a conventional engineering standpoint, the systems I make are often failures, but this shows us what we expect of our technologies.

How do you see us being shaped by our own devices and digital connectivity?

The launch of the iPhone in 2007 was one of the most significant moments in the history of computing. It’s crazy to think that this was only 10 years ago. Smartphones have caused humans to become radiotropes, organisms whose behaviors are shaped by sources of radio frequencies. Radiotropic is a term typically used to describe microbes who grow in response to sources of radiation at sites like Chernobyl.

Today, humans are not so different. We orientate ourselves around weaker sources like cell towers or Wi-Fi routers. We have become extremely sensitive to the presence or absence of signals, having developed these external electronic organs that can interpret waves as data. Of course constant connectivity leads to all sorts of weird and unexpected social phenomena, like ghosting, which is something Maya Binyam has been writing about.

How can we better structure our relationship with technology?

We have to abandon this narrative of progress. It’s really hard to do because it’s implicit in so much of our thinking, but rather than seeing technology as advancing us, we should instead see it as a catalyst for change. And these changes can be for better or worse. It’s really hard to predict how they will play out.

Assumptions that technologies solve problems, reduce risk or produce freedom, drive me crazy. And engineering as a discipline has much to gain from making these arguments. We are consistently told that new digital technologies will create a more democratic society — this is evident in early advertisements for the internet — and yet now we are seeing the internet be used for the rapid concentration and privatization of political power. Given this, we should be very very skeptical when AI companies, big data companies or VR companies use these narrative to sell product.

What do you see as the promise or potential of the internet?

If Facebook really wanted to solve fake news, they would revert back to a strict chronological timeline. But they’re not going to do this, as it would be at odds with their entire business model. Facebook, Google, “the cloud” – these things are not inevitable, but it’s easy to lose sight of this as these companies are investing so much in shaping discourse around their assumed inevitability.

What’s the best thing you’ve found on the internet recently?

For more on the internet and what it’s doing to us, check out this week’s episode of IRL. Follow Tega Brain on Twitter.